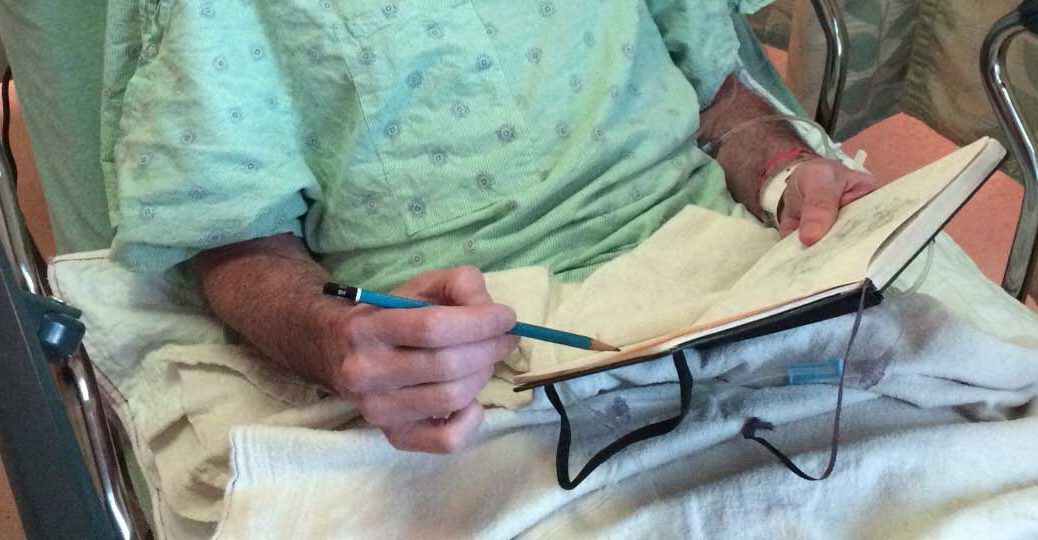 Okay, it is true. I carry a sketchbook with me wherever I go—even to the hospital!

Recently, I took time off work to deal with a few minor medical issues that I had postponed for quite awhile. I booked them all in the span of two weeks—what I will call my Club Med vacation. Of course, my sketchbook was in hand to record the experiences during the exhausting journey.

Unfortunately, I was unable to draw during the actual procedures—if I could have, I would have. But I did capture the following sketches before and afterwards.

Sketching is a great way to pass the time while waiting for doctors to see you. But one never knows just how long that wait will be. A sketch can evolve into a detailed study or it can end abruptly, at any moment.

Spending time in an OR prep area before a colonoscopy isn’t exactly my idea of a relaxing morning. But sketching can be a counter measure to anxiety, a meditation for relaxing and for observing my surroundings. Mundane objects such as a sink (shown above) become contemplative studies in perspective drawing. Well…that is…until the sedatives start flowing into the bloodstream.

During an ophthalmologist appointment, while waiting for him to examine my eyes, I noticed a hi-tech “slit lamp” close by. Its complex geometry of curves and angles and shapes (shown above) tested my sketching eye, both figuratively and literally.

Whether it is medical machines or human figures, I enjoy sketching quickly while aiming for accuracy. Sketching in various medical waiting rooms, such as the cardiology unit (shown above) was a challenge, but also enthralling. All sorts of fascinating people can become unwitting posers for sketchbook pages.

As I drew in bustling hospital environments, the view changed from moment to moment. People were moving constantly as they performed routine tasks, connecting vital tubes and wires to machines, and wheeling me from one place to another. With all the commotion, choosing subjects to draw became somewhat disorienting. During the blur of two weeks of exams and procedures, it seemed like the drawing subjects were choosing me. I was just along for the ride.

These experiences were my first ever for being admitted to a hospital facility for surgical procedures. Even though I was a little nervous, I was fascinated with the unfamiliar surroundings and gadgets—all were potential subjects to draw. I also found comfort in the compassion and professionalism of the people caring for me.

My interactions with specialists and staff members were particularly engaging as they seemed intrigued with my sketchy perspective. While at the blood lab, the phlebotomist laughed loudly when I observed, “We’re both artists…I draw pictures and you draw blood.”

Preparing for a double hernia surgery was a bit more of a serious matter than an eye exam. But conversations with the surgeon and his team seemed to take on a lighter tone when they noticed me sketching. We chatted about drawing and creativity—a reminder that an artist’s perspective is possible to employ in any line of work.

Nurses even turned the hospital gurney around so I could get a better view to draw various bedside gadgets. However, as I began to fade into sedation, my line work (shown above) began to fade away on the page.

“Hi, Rob,” said a nurse as her hand grabbed the side rail of the gurney. “I’m going to be your nurse in the operating room with you, if that’s okay.” Her out-of-focus face seemed familiar. Then it came to me—she was the mom of one of my youth drawing students! “Awesome, let’s do this!” I said as they wheeled me through doors that swung open, revealing the large robotic device that would soon assist in repairing my hernias. All went well with the procedure.

Such were the amazing and anxious moments that were made all the more memorable because of simply carrying a sketchbook with me and drawing what I could from life.

I have made it a point not to draw from photo reference in my observational sketchbooks. But in this case, the OR nurse (my youth student’s mom) emailed me photos of the da Vinci robot. So I decided to make drawings of the da Vinci and give them to my surgeon as a gift of appreciation.